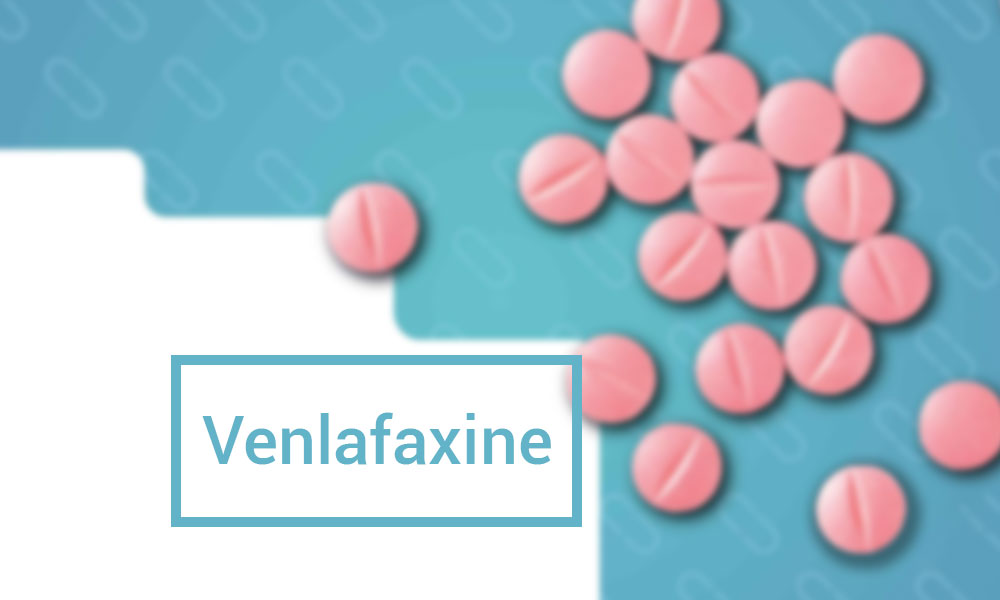 Venlafaxine (Effexor) is an antidepressant that belongs to the SNRI (serotonin-norepinephrine reuptake inhibitor) drug family. It works by inhibiting the transporters that are involved in the reuptake of the neurotransmitters serotonin and norepinephrine. It is recommended as a first-line therapy choice for generalized anxiety, social anxiety, panic disorder, major depressive disorder (MDD), and obsessive-compulsive disorder in Canadian professional practice standards as of 2014(OCD). Off-label uses include migraine headache prevention and the alleviation of vasomotor symptoms associated with menopause.

O-desmethylvenlafaxine ODV has antidepressant properties that are comparable to venlafaxine. Cytochrome P450 (CYP2D6), CYP3A4, 2C19, and 2C9 catalyze the formation of ODV.

Venlafaxine should not be taken by anyone who is hypersensitive to it or allergic to the inactive ingredients, which include gelatin, cellulose, ethyl cellulose, iron oxide, titanium dioxide, and hypromellose. It should not be taken with a monoamine oxidase inhibitor (MAOI) since it can create serotonin syndrome, which can be fatal.

Major depressive disorder (MDD), generalized anxiety disorder (GAD), social anxiety disorder (social phobia), and panic disorder with or without phobias are all treated with venlafaxine. Venlafaxine is also used off-label for migraine headache prevention, vasomotor symptoms related with menopause reduction, and neuropathic pain treatment (although there is only limited evidence of benefit for this illness). It’s also regarded as a second-line treatment for obsessive-compulsive disorder.

Venlafaxine’s precise mechanism of action is uncertain; however, it directly correlates to the stimulatory effects of neurotransmitter activity in the CNS. Venlafaxine and its active metabolite, O-desmethylvenlafaxine (ODV), inhibit serotonin and norepinephrine reuptake with a potency that is stronger for the 5-HT reuptake process than for the NE reuptake process. Both venlafaxine and its metabolite, ODV, have mild inhibitory effects on dopamine reuptake, but they are not active at histaminergic, muscarinic, or alpha (1)-adrenergic receptor, unlike tricyclics and SSRIs.

If you get a skin rash or hives, difficulty breathing, or swelling of your face, lips, tongue, or throat, seek emergency medical attention right away.

Mood or behavior changes, anxiety, panic attacks, difficulties sleeping, or if you feel impulsive, impatient, agitated, hostile, aggressive, restless, hyperactive (mentally or physically), more depressed, or have thoughts about suicide or harming yourself should all be reported to your doctor.

If you have any of the following symptoms, call your doctor right once.

Venlafaxine caused a limited percentage of adolescents, teens, and young adults to become suicidal. Suicide may occur at any time throughout your therapy, including when your dose is increased or lowered. If you encounter any of the symptoms listed below, contact your doctor straight away. Consult your doctor about the risks and advantages of using venlafaxine or other medicines to treat your problem. Suicide risk is considerably increased if you suffer from depression or any mental disease. If you or someone in your family suffers from bipolar disorder or mania, you’re at a higher risk.

Inactive chemicals in venlafaxine can induce allergic reactions or other complications. This medication may cause dizziness, drowsiness, or blurred vision. While taking this medication, do not drive, operate machinery, or do anything else that requires alertness or clear vision.