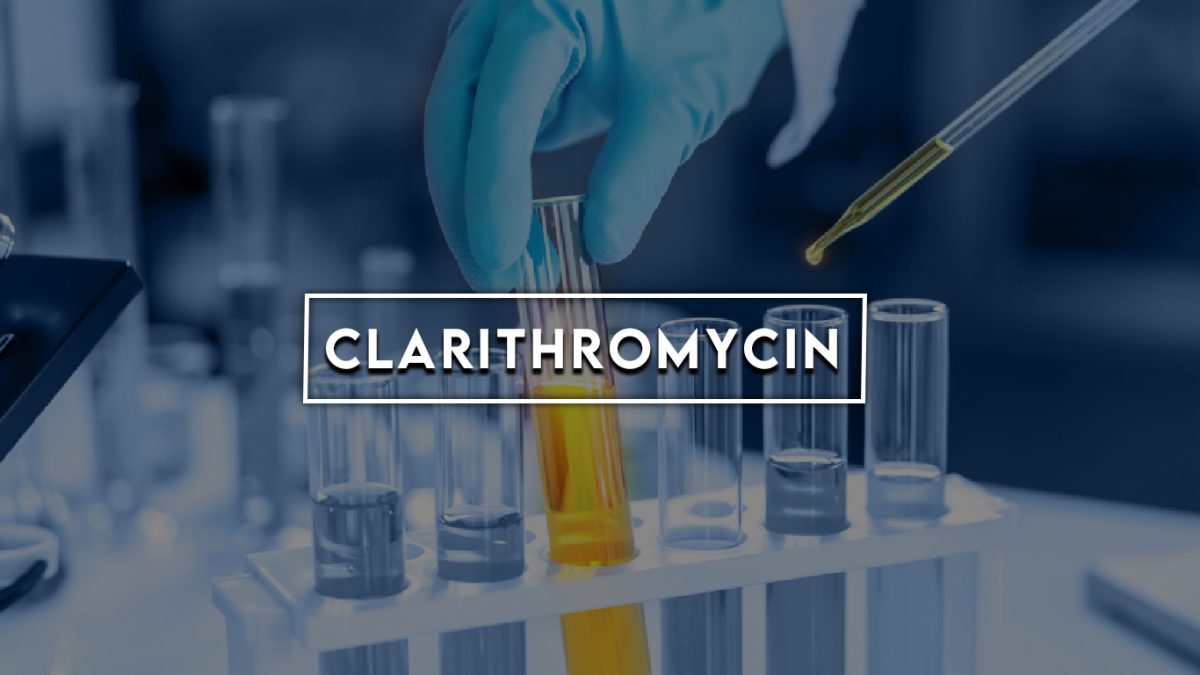 Clarithromycin is a macrolide antibiotic. Macrolides are compounds characterized by a macrocyclic lactone ring to which deoxy sugars are attached. Clarithromycin is a semisynthetic derivative of Erythromycin obtained by the addition of methyl group to hydroxyl group at carbon 6. Clarithromycin is effective against gram positive bacteria. Antibiotics require constant drug level in body for therapeutic effect. This is achieved by taking the medication at regular interval of time throughout the day and night as prescribed. Clarithromycin is important to take the drug for the full time period as prescribed. If you discontinue the therapy, it may result in ineffective treatment.

Clarithromycin is a macrolide antibiotic whose spectrum of activity includes many gram-positive (Staphylococcus aureus, S. pneumoniae, and S. pyogenes) and gram-negative aerobic bacteria (Haemophilus influenzae, H. parainfluenza, and Moraxella catarrhalis), many anaerobic bacteria, some mycobacteria, and some other organisms including Mycoplasma, Ureaplasma, Chlamydia, Toxoplasma, and Borrelia. Other aerobic bacteria that clarithromycin has activity against include C. pneumoniae and M. pneumoniae. Clarithromycin has an in-vitro activity that is similar or greater than that of erythromycin against erythromycin-susceptible organisms. Clarithromycin is usually bacteriostatic, but may be bactericidal depending on the organism and concentration of drugs.

Clarithromycin is first metabolized to 14-OH clarithromycin, which is active and works synergistically with its parent compound. Like other macrolides, it then penetrates bacteria cell wall and reversibly binds to domain V of the 23S ribosomal RNA of the 50S subunit of the bacterial ribosome, blocking translocation of aminoacyl transfer-RNA and polypeptide synthesis. Clarithromycin also inhibits the hepatic microsomal CYP3A4 isoenzyme and P-glycoprotein, an energy-dependent drug efflux pump.

The severe or irreversible adverse effects of Clarithromycin, which give rise to further complications include Renal failure, Interstitial nephritis, Pseudomembranous colitis.

Clarithromycin produces potentially life-threatening effects which include cerebial hemorrhage. which are responsible for the discontinuation of Clarithromycin therapy.

The signs and symptoms that are produced after the acute overdosage of Clarithromycin include Hypoxia, Hypokalemia.

The symptomatic adverse reactions produced by Clarithromycin are more or less tolerable and if they become severe, they can be treated symptomatically, these include Headache, Nausea, Vomiting, Diarrhea, Abdominal pain, Phlebitis, Glossitis, StomatitisX, Elevation of liver enzymes, Taste perversion, Increased intracranial pressure, Hypoglycemia.

Clarithromycin should be used with caution in patients with other illnesses or any allergy, especially allergies to drugs, arrythmias ,liver disease, jaundice (yellowing of the skin or eyes), kidney disease , or a history of colitis or stomach problems. This drug should be used only if clearly needed during pregnancy or lactation.

Store in a well closed container, Below 40°C. Protect from Sunlight and Moisture.

Elevations of SGPT and SGOT