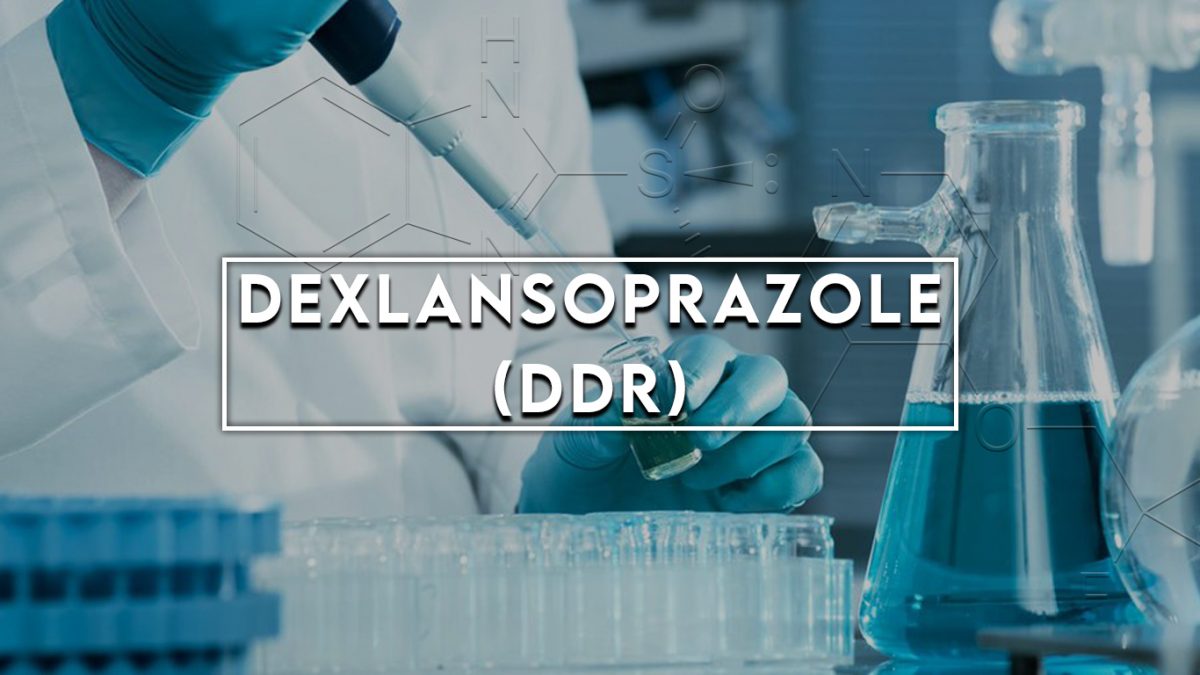 Dexlansoprazole is a new generation proton pump inhibitor (PPI) used for the management of symptoms associated with gastroesophageal reflux disease (GERD) and erosive esophagitis. Dexlansoprazole the R-enantiomer of Lansoprazole, which is composed of a racemic mixture of the R- and S-enantiomers. Compared to the older generation of PPIs (which includes Pantoprazole, Omeprazole, and Lansoprazole) , dexlansoprazole MR has a unique pharmacokinetic profile due to its delayed-release and dual-delivery release system. The active ingredient is released in two phases at different pH values and at different time points, resulting in two peak concentrations in the blood; 25% of the dose is released at pH 5.5 in the proximal duodenum, while the remaining 75% is released at pH 6.75 in the distal small intestine . As a result, dexlansoprazole has a peak concentration within 1-2 hours after dosing and another within 4-5 hours . Dexlansoprazole’s unique pharmacokinetics addresses limitations of the older generation PPIs including short plasma half-life, break-through symptoms, and need for meal-associated dosing . These characteristics make dexlansoprazole a good option for people who struggle with adherence and strict dosage timing before meals.

Dexlansoprazole exerts its stomach acid-suppressing effects in the same way as other drugs in the PPI family by inhibiting the final step in gastric acid production. Dexlansoprazole targets the (H+, K+)-ATPase enzyme, which is involved in the secretion of hydrochloric acid through the exchange of H+ ions from the cytoplasm for K+ ions. Normally functioning (H+, K+)-ATPase stimulates hydrochloric acid secretion into the gastric lumen thereby increasing stomach acidity and lowering pH. Once absorbed into circulation, dexlansoprazole covalently binds to the sulfhydryl groups of cysteines found on the (H+, K+)-ATPase enzyme at the secretory surface of gastric parietal cells, which leads to inhibition of both basal and stimulated gastric acid secretion. Despite dexlansoprazole’s unique pharmacokinetic profile, efficacy in management of GERD symptoms is considered similar to other medications within the PPI class including Omeprazole, Esomeprazole, Lansoprazole, Pantoprazole, and Rabeprazole.

Due to their good safety profile and as several PPIs are available over the counter without a prescription, their current use in North America is widespread. Long term use of PPIs such as dexlansoprazole have been associated with possible adverse effects, however, including increased susceptibility to bacterial infections (including gastrointestinal C. difficile), reduced absorption of micronutrients including iron and B12, and an increased risk of developing hypomagnesemia and hypocalcemia which may contribute to osteoporosis and bone fractures later in life  PPIs such as dexlansoprazole have also been shown to inhibit the activity of dimethylarginine dimethylaminohydrolase (DDAH), an enzyme necessary for cardiovascular health. DDAH inhibition causes a consequent accumulation of the nitric oxide synthase inhibitor asymmetric dimethylarginine (ADMA), which is thought to cause the association of PPIs with increased risk of cardiovascular events in patients with unstable coronary .

Dexlansoprazole doses should be slowly lowered, or tapered, before discontinuing as rapid discontinuation of PPIs such as dexlansoprazole may cause a rebound effect and a short term increase in hypersecretion .

Dexlansoprazole is indicated for healing all grades of erosive esophagitis (EE), maintaining and healing of EE and relief of heartburn, and treating heartburn associated with symptomatic non-erosive gastroesophageal reflux disease (GERD).

Dexlansoprazole is a proton pump inhibitor (PPI) and is included in the drug class of antisecretory compounds. It blocks the final step of gastric acid secretion by specific inhibition of the (H+, K+)-ATPase at the secretory surface of the parietal cells on gastric mucosa.

Dexlansoprazole inhibits the H/K ATPase enzyme, which is involved in the secretion of hydrochloric acid, hydrolyzing ATP and exchanging H+ ions from the cytoplasm for K+ ions in the secretory canaliculus, which results in HCl secretion into the gastric lumen. Dexlansoprazole inhibits this effect of H/K ATPase by demonstrating a high degree of activation in the acidic environment. After passing through the liver and reaching the gastric parietal cells activated by a meal, PPIs undergo protonation in the acidic pH environment, followed by conversion to sulphenamide which represents the active form of the drug. Sulphenamide inhibits the activity of the proton pump and hence the transport of hydrogen ions into the gastric lumen via covalent binding to the SH groups of the cysteine residues of H/K ATPase 2. The delivery technology of dexlansoprazole MR is designed to release the drug in two separate pH-dependent phases, the first in the proximal duodenum (25% of total drug dose) and the second (75% of total drug dose) in the more distal small intestine. Dexlansoprazole reduces both basal and stimulated gastric acid secretion.

Dexlansoprazole is cleared from the body by either fecal excretion (50.7%) or renal excretion (47.6%) following oral ingestion, with no unchanged drug detected in the urine.

Dexlansoprazole is eliminated with a half-life of approximately one to two hours in healthy subjects and in patients with symptomatic GERD.

Apparent clearance (CL/F) in healthy subjects was 11.4 to 11.6 L/hour, respectively, after five days of 30 or 60 mg once daily administration

Most commonly reported adverse reactions are diarrhea, abdominal pain, nausea, upper respiratory tract infection, vomiting, and flatulence. There are no reports of significant overdose but serious adverse events of hypertension have been reported in association with twice daily doses of DEXILANT 60 mg. Nonclicnial toxicology of dexlansopraole was assessed using lansoprazole studies. In two 24-month carcinogenicity studies involving rats, lansoprazole induced dose-related gastric ECL cell hyperplasia and ECL cell carcinoids and increased the incidence of intestinal metaplasia of the gastric epithelium in both sexes of rats. Dexlansoprazole is expected to have no effect on fertility and the reproductive system.