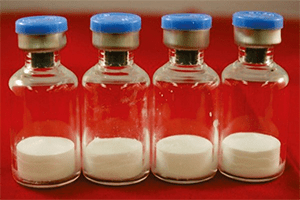 Pellets are prepared by utilisation of freeze drying method in this technique. Vision Pharmaceuticals employs industry leading Lyophilisation techniques and produces highest quality sustained release, taste masked pellets that otherwise impossible to manufacture due to water sensitivity. Liquid nitrogen (-196 °C) is used as a medium, that causes freezing of droplets of liquid formulations into solid spherical particles which, then Lyophilised to produce pellets.

In this technique material freezes Immediately and uniformly due to rapid heat transfer from material’s droplets to liquid nitrogen. The total amount of liquid nitrogen required dependent upon quantity of solution. The equipment consists of a nitrogen container and a conveyor which with its variable speed maintains the required residence time for freezing the Pellets. Frozen pellets stored in a storage container (Temperature -60°C ) before drying. In this process droplet formation a critical step influenced by many variables like nature, viscosity, surface tension, solid content of the solution and equipment design.

Feeding of extruder through hopper.

Flow through the die under controlled conditions.

Vision Pharmaceutical uses this technique for the variety of benefits including but not limited to.,

. Pellitization of drugs with poor bioavailability.

. For uniform suspension of drug particles with better content uniformity.